An intro to Behavioural Economics by a UX designer

Key concepts from Behavioural Economics every UX designer should know

Behavioural Economics is the combination of traditional economics and psychology. It takes into consideration the human factor — human needs, desires and weaknesses. (Sound familiar designers?) Traditional economics ignores this critical part of the equation, but this would be like ignoring air resistance or friction in a basic physics class. They use a 100% rational, constantly optimizing ideal of a human, referred to as “Homo Economicus” by Richard Thaler.

But alas, the Homo Economicus is but an economists fantasy and we humans are in fact irrational beings. We do not always behave logically, and people do not constantly optimize or use our digital services in a predictable way. Designing the perfect user interface may be possible in theory, but we have to remember that we design for humans, with human factors.

Behavioural Economics has some interesting insights to offer for us designers around how our users irrationally live, make decisions and purchase products. Here are a few concepts you should know:

The study of psychology as it relates to the economic decision-making processes of individuals and institutions (investopedia).

People with a perfect rationality. The term Homo Economicus, or economic man, is the portrayal of humans as agents who are consistently rational and narrowly self-interested, who pursue their subjectively-defined ends optimally. In other words: a person who always thinks in an optimal economic way.

The human mind has a tendency to think in the desires of the moment, not always on what is coming up ahead and rational needs. Money is “fungible”. This means that you do not go around labeling money for different needs and purposes. Money is just money. However, many studies have shown that we do treat money from different sources differently. For instance,; we value money earned more than money we win or find on the street. For example, take my case, birthday money! If I get money for my birthday, and I’m 31 years old, I save it for something special. I never touch it unless I know that I am going to buy something special with it, even if I needed the money right then and there. I would rather use my credit card, than use my birthday cash on something as necessary as food. 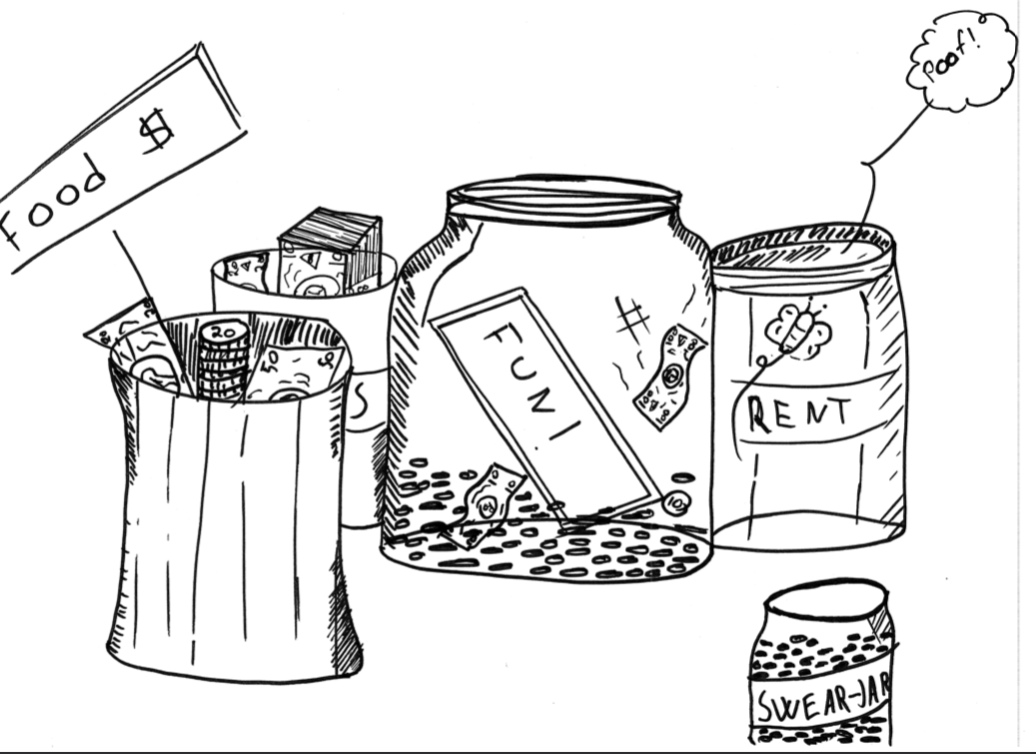 Ah.. the swear jar.. always full, aren't you! Can’t use that to pay the rent.. thats for.. swearing?

Treating money differently depending on where it comes from, rather than treating it all the same.

There are various interconnecting terms and principles between UX design and Behavioural Economics. For instance, social norming. Whether we like it or not, we all follow social norms to some extent. We do not want to differentiate ourselves from others, especially not those we identify with. This comes from a basic instinct, like the response to run, when we see others run (there might be a tiger!). This is used in both design and sales, with ads like: “other people who bought this also bought this” etc.

The urge to follow and do what other people you identify with do.

“Nudging” is perhaps the most known term from Behavioural Economics and is used in design today. Nudging is described as “A loving, gentle push in the right direction” by the Danish nudge unit. Nudging is using what we know from Behavioural Science, and cognitive biases to influence users to take choices that are good for them. But it can also be used in reverse. If the nudge is used for a company’s own gains, it’s called a sludge. Nudging is nothing new. Commercials have tried to sell us things for years, but in later years, governments have established nudge-units around the world to try and impact the population in a positive way for the greater good. An example of a good use of nudging can be found in Canada. Government Services’ Behavioural Insights Unit in Canada, managed to increase the percent of people willing to donate their organs after their death by 143% after using nudging on the registration form patients are given in the health service center.

The methods used were:

“A nudge is a concept in behavioral science, political theory and behavioral economics which proposes positive reinforcement and indirect suggestions as ways to influence the behavior and decision making of groups or individuals”

Did you find this interesting and want to dive a bit deeper? Check out the links below to either a really fun podcast, or a couple of really good books.

I can recommend the books, misbehaving and nudge by Richard Thaler. I would also recommend that you to listen to the podcast freakonomics, and, if you want, also read the book freakonomics by Stephen J. Dubner and Steven Levitt.

Thanks so much to Sonja for your valuable insights and strict eye for grammar! Thanks to Eivind Mangset for inspiration and sparring with me on this post, and thanks Hamy Nguyen for the sketch of me that sparked the inspiration for the illustrations.

Read more outside the calendar